… and another thing..Palenque Punch & Barranquilla Boom from Latino Resiste & ting 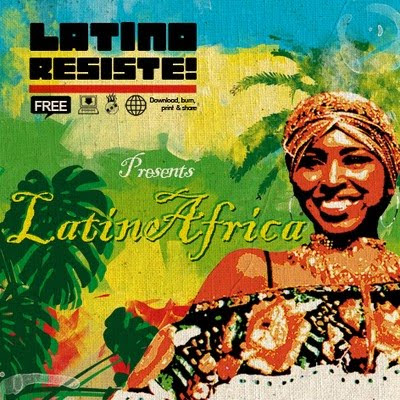 ayo, just a quick one to tie up a loose end. I played a few tracks from the Latino Resiste Presents Latin Africa comp on Stinky Grooves this week but couldn’t track down a link to put in the playlist for the life of me at stupid o’ clock Wednesday morning.
This time around Caballo has focussed on the riotous rhythms of northern Colombia enlisting expertorama Lucas Silva to highlight old and new gear where the African influence that harks back to the slave trade and the roots of so much astounding Colombian music, dominates. There’s some exceptional stuff on there (and to be fair, some not so my cup of proverbial), the bitrates vary and my mild audio nana-ism means that there’s some tracks I won’t be playing on the radio – but it’s definitely worth a DL for the gems in hifi, especially if you haven’t familiarised yourself with this kind of gear before.
Check it for free at the excellente Radio canahl blog (and there’s an excellent Frente Cumbiero interview up there too, that just needs a touch of Translate for non-Frenchy speakers)
The Palenque Palenque comp on Soundway is something else again but also essential, and that has really been growing on me over recent weeks. I keep thinking I must play more on the radio, but inevitably the newness keeps jumping the queue…such is life. Combine that with some of the artists Lido Pimienta refered to in my recent interview with her (which will be appearing in the September Real Groove as a 2 page feature, and split up to a couple of posts on stinkinc, transcript style & fashion, in the next month) and it’s been a right old northern Colombian jamoboree round at the renking gates, and I’ve got no argument with that.
Also on the interview tip, this very morning I had an extended and illuminating conversation with Oriental jazz legend and ethonomusicographer par excellence, Lloyd Miller. Well, when I say conversation it was largely one sided, and delightfully so, I reckon I got about 3 of my prepared questions in over the best part of an hour. I don’t want to go too deep into this now because I will be doing so, properly, up here in the near(ish) future. I’m not sure he can match Lido’s seven (yes, seven!) pages of brilliant responses in terms of numbers, but it’s not far off, and the man has a mind that should be marveled at. It’s got me all inspired in a number of directions and feeling like shrugging off the afternoon’s remaining work to create something in an unusual scale and time signature… but that may have to wait for another day. Musically and philosophically I don’t expect the venerable Mr Miller to be everyones cup of proverbial, I’m sure he would retract in horror at 98% of the music I play, let alone release or make – but informed dissenting voices, especially ones that can back it up with personal experience, astonishing knowledge, history and depth are all too rare in this day and age. Aside from a Herculean transcribing job I’m really looking forward to sharing that phone call with y’all… keep ’em peeled and we’ll have a word about that album he’s done with Heliocentrics for Strut/K7 real soon.
There’s more but I really need to get some of the tunage that has dropped in the inbox since Tuesday primed and primped for Aromatherapy tonight..hasta lluego.

my pleasure, your Presidental