and it goes on …Ninja Tune niceness on Saturday
Saturday is a bussssy one. We’ll be having some action about the Wooden Shjips at Whammy up here real soon, but also going and on-ing is this, which should be ripperatious at the very least. Read about the gents below, with commendations from folks who are considered totally top shelf at StinkInc like Kev Food and His Majestery Steinski. I’ll let you know on set times etc as it comes to hand, so gird your loins and summon up your strength because this is going to be a fearsome weekend requiring full match fitness. 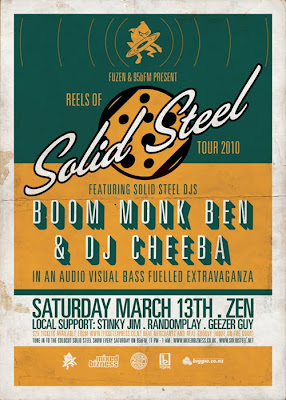 Boom Monk Ben (Solid Steel / Mixed Bizness)
Armed with Serato, two quick hands and the most diverse crate of dance floor fillers you’ve heard, the Boom Monk has developed a sound and style that is undoubtedly his own. Having cemented his position as one of Glasgow’s most popular DJs, his Mixed Bizness club nights attract crowds of 800 people to the Glasgow Art School every week and continue to lead the way in one of the most vibrant and productive club scenes on the planet. As well as rocking his native Glasgow on the regular, Ben has caught the attention of clubs nationwide and further with appearances at the best clubs in Montreal, Cape Town, Paris, Moscow, Berlin, Zagreb, London, Vienna, Ljubjlana, Liverpool, Belfast, Bristol, Edinburgh and loads more exotic locations as well as the best festivals on the calendar including Rockness, The Big Chill, Bestival, Hydro-Connect, Copenhagen’s Public Service Festival and the Montreal’s Piknik Elektronik.
A frenzied fanatic of all things bass, the Boom Monk leaves no stone unturned and no sound unheard in his quest for dancefloor devastation. From hip hop, dancehall, funk and break beats to house, funky, electro, dubstep and drum and bass, as long as it makes him, us and you move on the floor then it will get put the through the blender in his inimitable style.
The mighty Ninja Tune saw fit to approach Ben to record a series of ‘Boom Monk Zen’ mixes for their world famous Solid Steel radio show, which is broadcast in 30 countries world wide. They were suitably impressed with the results and as part of Ninja Tune’s 20th Anniversary the label and their Solid Steel DJ crew approached Ben to join their official ranks alongside Coldcut, DJ Food, DK, Kentaro, Hexstatic and other new recruits Cheeba and DJ Moneyshot. You can check his fidgety fingers on the regular by tuning into Solid Steel.
Boom Monk
BoomMonkspace
Cheeba (Solid Steel / Detectives of Perspective)
Peel back your ears, stick matchsticks in your eyes, set your jaw to ‘drop’… Bristol’s, Detective of Perspective, DJ Cheeba is plugged in and here to turn the tables. With his trademark slick blend of classic breaks, hip-hop, electronica, rock, kid’s records, d&b, and in fact everything in between and beyond, Cheeba has the unrivaled technical ability, knowledge and humour to pull it all together like no one else. He’s on a one-man mission to cut and paste anything and everything you’ve ever seen, heard or imagined. Prepare for mind melt… Cheeba is certainly not your standard disc jockey.
In 2008 Cheeba won the coveted ‘Solid Steel Mix of The Year’ with his, highly regarded, genre twisting mixtape ‘The Case of The missing Records’ and has since been invited to officially join the Solid Steel family alongside Ninja Tune legends such as Coldcut and DJ Food. Using this platform, Cheeba has quickly gained fans world wide and has been everywhere and anywhere doing his thing often out shining his peers and heroes with intricate sets of undeniable creativity. You can certainly expect the unexpected though, Cheeba digs deeper than most and will take you on a trip of long forgotten beats, breaks and videotapes.
Following a string of high profile shows performing various parts of his mixtapes live on three decks, two laptops and mixers, Cheeba is now pushing boundaries even further and often well out of sight. Using standard turntables and Serato Video SL to enable video controlled by real vinyl records, Cheeba now has brought scratching and juggling both sounds and pictures into the mix with additional camera feeds and special FX for stunning live results. Original films, remixes and music videos made by Cheeba and, on stage partner, James Reed (Thousand Thousand Points of Light) all blend seamlessly with inspired video mash ups, unusual animations and a wealth of wonderful and often bizarre visual sources. Its a video show unlike any other… Every track is remixed or re-edited, every video is custom made, concealed meanings make you think twice, movie clips cross reference the songs and subliminal messaging all add to this weird and wonderful brew of unique audio visual entertainment.
“Cheeba’s attention to musical detail is as meticulous as his cuts, he leaves no stone or style unturned in his search” – DJ Food
”Cheeba – the new Director General at Flip-Flop-Trip-Hop AV-TV” – Hexstatic
“yo, that av set is amazing!!!” – DJ Yoda
“I absolutely loved what I heard” – Steinski
Cheebaspace
Cheeba