(B)Eat Your Vegetables & somethings for the weekend sir?!

A quick slupdate from stinkinc central on some stuff that matters.

Fer localites don’t forget we’ll be stirring up that musky muzak and wafting the woofers tonight at Ginger Minx for Aromatherapy from 8.30pm or thereabouts, t’would be delightful to see you.Meanwhile read on for this weekends actioneration which is non-olfactory in its’ constitution but promises to reek to the rafters… but first check this.
Our long time good mucker and foley don Tim Prebble (aka Short Fuse, R&D, Suizen etc) is on a bit of a roll of late. First there was the introduction of his Dub 45/Suizen project which we have rahed about previously, and comes with the heftiest of recommendations. Now he has got all up in his greens and kicked off an online sound library malarkey under the hissandaroar banner. Do have a gander at the tres amusant and awfully clever video Tim has put together below, and check out the site (linked above) which has the full guts, and where you can even get a free sample of the terrible things he has put greengrocery goods through for the sake of a good sound. Vegetarians may find this offensive…. well at least I hope so.
Moving right along there’s a couple of very tasty gigs on Saturday that rank a renk.
From early out (6ish apparently) the Homebrew chaps are having a spot of fundraising action having got the bozak from NZOA. Well we’ve all been there (or at least I have..) and I like the approach that they’ve taken with these vids and whatnot. Check one of ’em below and a whole heap more on the Homebrew site, there’s also a David Farrier spoof which is most amusing that he (Farrier that is) will be featuring in Nightline tonight. Points and prizes all round, would be lovely to see all the jaded journalists, haters and liberal bedwetters who got their jollies taking shots at MTC over the Dirty Sesh clip a couple of weeks ago, using their poisonous pens and toxic typewriters to applaud and support something like this…. but I’m not holding my breath, maybe they only notice hip hop when they can stick the boot in.
Hanyways, don’t start me on that. Vid and flyer below see you there….. and read on for more Saturday night stupendosity. 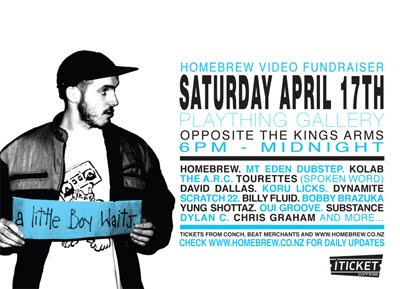 Since the Homebrew do is an early starter, it should leave the intrepid unraveller plenty of time to head up to KFM where than man Mark Pritchard will no doubt be unleashing all sorts of bowel vacationary sub-bass type business. His Harmonic 313 album was one of last year’s best, and he’s a man who always comes correct behind the decks with his own productions, and future slices of other folks that most discerning record spinning types would give their right arm for. It’s a verifiable steal at only $15 and word is that he’ll be spinning from around 1am though the support line-up should get some ….. er support, and is not to be sniffed at. Flyer below, as previously mentioned a warm-up at the Minx tonight is strongly recommended for a smooth transition into what should be a delightfully messy weekend. 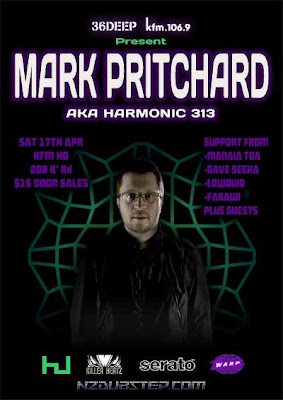 ahoy michael
i believe i have checked them thar austrians but its the GBH of the greens that appeals to me (wonder if Tim could also do that to frigging ukuleles? thats a sound I’d like to hear!). lovely to hear from you squire

that Homebrew vid is hilarious