There’s a blurble below but all you really need to know is that the tickets are on sale now for a musical event that I can’t imagine being surpassed this year – I’m phenomenally excited about this one (so almost perfectly timed that I think we can extend my birthday for a day and announce the 19th of July as some kind of Goblin Public Holiday), and now that I have my tickets secured, I’m more than happy for everyone else to get excited too! Tix available from the asshats at Ticketek right now (so yes you’ll be getting shafted for a booking fee and not able to choose you seats online – wankers!), I would normally link to them but it would make the blog feel dirty, but here’s the 2013 NZIFF linkaorama
All being well I should have some more news regarding this show and Goblin and maybe even a some interview action in the meantime betweentime…
Hugest props to Mr Ant Timpson for pulling this one out of the bag!
++ ++ ++

For one night only the Mighty Civic is transformed into a Gothic cathedral of psychedelic doom. NZIFF plays host to a unique live cinema performance from Italian rock legends Goblin as they accompany the searing neon visuals of Dario Argento’s horror masterpiece Suspiria with their own pulsating score.

When Italian horror maestro Argento was dissatisfied with the orchestral score for his 1975 thriller Deep Red he called on the services of the young progressive rock band Goblin to give the film a more modern sound. For his next film, he reteamed with Goblin to create this now legendary soundtrack.

Goblin recorded their score prior to filming and Argento used the squalling intensity of their music on set to push his actors into the right state of mind, namely sheer terror. Jessica Harper, who was the principle victim of their torment, stars as an American ballet student who joins an insanely pretentious German dance academy and discovers she’s entered a coven of witches.

As the tagline from the original grindhouse release put it: ‘The only thing more terrifying than the last 12 minutes of this film are the first 92.’ Given that the film is only 98 minutes long, it’s already bending your mind.

“Suspiria is Goblin in full control of the score… Its appeal lies in the part-cynical, part-celebratory appropriation of quasi Satanic rock tropes such as Druidic vocal incantations, hypnotic beats, searing noise peaks, para-orchestral, collapses and gaudy timpani flourishes… For the audience who gave them a standing ovation, Goblin had enacted the musical mechanics of the malevolence which so empowers Suspiria.” — Philip Brophy, The Wire 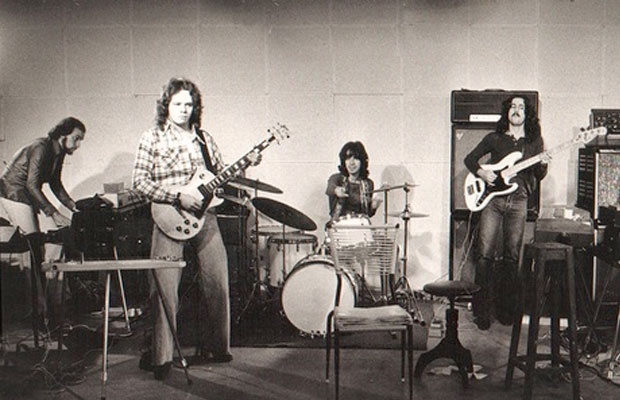