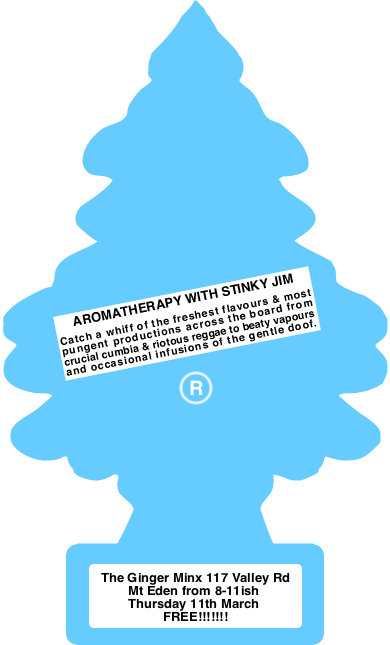 It is a gigantuan week of gigs this week as you can probably tell as this here blog becomes literally littered with fancy flyers exhorting you to come hither and make merry with the finest tunes in your ears.
In short – Thursday is Aromatherapy at the Minx. I missed doing this one last week, even though I did nip in for a swifty on the way home from work and Geezer Guy was doing a most excellent job, as one would expect. Sooo I’ll be back on Thursday with tunes a plenty, a double week bonanza of excess freshness, can hardly wait.

Friday is round two with the long awaited return of Bubble Up at Tabac. Star studded line up for this one with Maiden Hong Kong, Gwaan Gal, Jahred and FJ. Expect lashings of JA biz with a side dish of Cumbionic crucialities… delicious.

Saturday ramps up the heat with a double header kicking off with San Francisco’s mightiest Wooden Shjips alongside The Expressive Men at Whammy Bar, all being well I’ll be wanging down some light footed yet thoroughly leaden gat blazers inbetweens. Expect the best band of psychkrautrocking West Coasters imaginable, at the very least. Will be pranging up the full interview I did with them last year on StinkInc in the next day or two… promise.

Finally the Solid Steel endorsed duo of Boom Monk Ben and DJ Cheeba will be dispensing some A/V THC at Zen, also on Saturday. My good mucker Geezer Guy will also be spinulating as well as Mr Randomplay… should be swell, flyer below.

Will try to drop a post with set times as and when I have ’em.

So all of this prevarication leads me to the track from tonight’s show, which in all honesty I know next to nothing about. I do know that Mohammad Nouri is a big cheese in Iranian music, in fact his was just about the only name I had the slightest clue about on the mind bogglingly brilliant Pomegranates on Andy Votel and pals Finders Keepers label. Unless you’ve got a fully rabid case of diggermylitis I’m sure your jaw will drop, as mine did, at how unmitigatedly groovy and western psych/pop influenced these cuts from Shah-era Iran are. There isn’t a duff track on the entire comp and it comes with the highest recommendation I could possibly give. As ever the 192 below is up for a week and the strong suggestion, or possibly implied threat is… this album MUST be bought and perused, it’s beyond essential.

woah, thanks for that track. Mad.